There is a specific workflow that declarations follow in ASK to help ensure that the declarations process runs smoothly. The declaration status is used to track who can act on a declaration, and what specific actions can be taken. The possible statuses and what they mean are:

The diagram below illustrates how these statuses connect to each other: 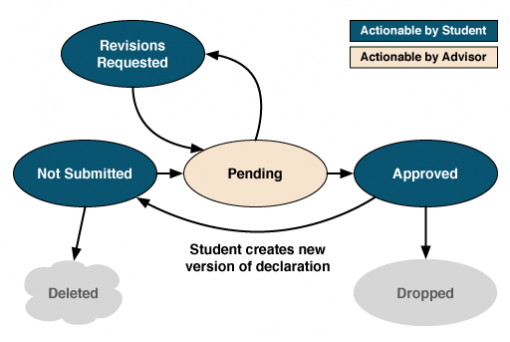 The handoff points between students and advisors is one of the most important things to keep in mind with the Declarations workflow, especially as deadlines near. As a student, it is your responsibility to submit (or re-submit) your declaration for approval. As an advisor, it is equally important that you properly flag submitted declarations as "Revisions Requested" when you want your student to make changes. Until you do this, the student will not be able to edit the declaration.

1 of 1 people found this page helpful


Reporting an IT Outage?